Brilliant Bicycles L-Train Review: Is It A good Commuter Bike? 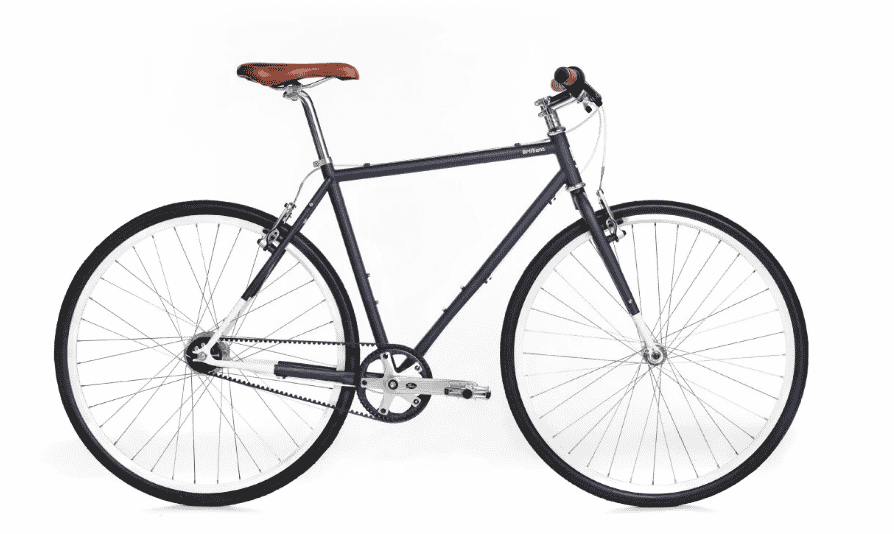 The L-Train by Brilliant Bicycles has quickly become one of the most popular commuter bikes out there. Inspired by the increased need for affordable commuter options after the L-train (the subway line, not the bike) had to be closed for 15 months of repairs, the bike is styled after it’s Brooklyn roots. Available in a gray or blue paint job, to honor the subway and river.

Of course, a paint job and a good story wouldn’t be enough to create a great bike. The design of the L-train is relatively basic. The L-Train doesn’t come with additional racks or a water bottle holder but instead includes the mounts to customize as you will.

Despite that basic design, the L-Train is far from a simple bike. Its hybrid frame accelerates like a road bike, and it offers superb control in a lightweight and attractive package. The bike has a slightly more aggressive riding style than some hybrid bikes, which makes it a nicely speedy commuter option.

Especially if you’re looking for something to replace your regular subway ticket while the line is still under repairs, this is a good option. Not to mention that the price of the bike is more affordable than taking the subway every day, and a lot more reliable.

In our review, we’ll look at the details behind the bike, from the individual components to how the frame holds up to regular use. We’ll also help to identify who the ideal cyclist for the L-train is, and who might be better served by a slightly different model, or a different bike entirely.

Things to Consider Before Buying a Commuter Bike

That said, commuter bikes are something of a hybrid jack of all trades. They aren’t designed to excel in any one area, but instead to meet the balanced and variable needs of a regular urban commute.

When you want a commuter bike, you should look for a lightweight and slim option. That’s because lightweight bikes are easier to carry, easy to accelerate up to speed and stop faster than bulkier versions. Slimness also helps to make the bike easier to maneuver, and easier to navigate crowded city streets.

But that doesn’t mean that commuter bikes are a do-everything bike. They aren’t very well suited to gravel or dirt roads, and they don’t generally handle other kinds of rough terrain very well. The frames might be up to the job, but the wheels, spokes, and limited suspension are all designed for relatively flat even roadways.

The L-train, like other commuter bikes, is really designed for commuters, and slightly more casual riders who are looking for a flexible and fast bike.

The L-train frame comes in three different sizes, small medium and large, and offers saddle and handlebar height adjustments to make it accessible to a relatively wide range of different heights. The frame is also designed so that it works as a unisex bike, though you’ll probably need to change out the saddle to make that happen.

The frame is designed for a slightly more aggressive seated position. It’s not quite as low as a traditional racing bike, but less upright than a typical hybrid.

The frame is made from high-quality Chromoly steel. It’s incredibly durable, and up to more active use than many hybrids. The steel is long-lasting, and the fork is made of matching material. Chromoly is strong enough that the frame can be thinner in most areas than many aluminum alloy frames, though it widens toward the welds.

That welding also makes the frame significantly stronger. Brilliant Bicycles provides a high-quality weld on every seam, reducing the chances of cracking or other signs of stress, even after the bike has been put through its paces regularly.

However, Chromoly is still heavier and slightly less durable than carbon frames, which are what you’ll typically find on a racing bike. The frame is one of the places that the L-train is a little more similar to other hybrids or mountain bikes.

As a commuter bike, the L-train has a relatively light suspension system instead of the more robust systems found on mountain bikes, and even some fixies and fat bikes. It does offer a relatively smooth ride, but you will feel the bumps and dips and you ride, and you probably don’t want to try taking it down a staircase unaltered.

Unfortunately, this isn’t a bike that you can easily add thicker tires or other suspension features to add a little more resistance. You’d need to replace the wheels and/or the fork to get a serious boost, so this is best for users who don’t mind the occasional bump.

Despite the limited suspension, you’ll get decent wheel clearance on the L-train. It comes with 32mm wheels and a 45mm wheel clearance. The rims are wide enough to accommodate most standard tires, but they aren’t well suited to converting this bike to a fat bike.

You may want to use some rim tape to help preserve your tires, not because the wheel rims are bad, but simply to help prolong the life of your tires.

The spoke design is simple but sturdy. You won’t have to worry about bending or breaking the spoke with normal use, though you might want to check them if you accidentally jump this bike, or take it over rougher gravel or dirt terrain.

Most commuter bikes have a more limited gear selection. A few gears are generally considered all you need to be able to handle hills and other terrains between you and your workplace.

The bike uses a Shimano Nexus 7-speed shifter, which is both more than many commuter bikes and less than most racing bikes or mountain bikes. That said, the Shimano shifter is incredibly smooth and easy to use, and you’ll get more utility out of the 7 gears on this bike than you would on many bikes with twice the gearing capacity.

The brakes are one area where the L-train shows both a great deal of attention to the design and some slight compromises. The main compromise is that the bike uses rim brakes instead of a disc brake system. That means that your bike will stop slightly more slowly than it would with a disc brake, which can be a problem in the most crowded areas and in stop and go traffic.

However, rim brakes are significantly cheaper to buy and maintain than disc brakes, so using a rim brake system helps keep the bike more affordable for the average commuter.

The good news is that the Shimano V-Brake system is easy to use, highly effective, and faster than most rim brakes. It has moderate maintenance requirements, but you should be able to meet its needs with only minimal adjustments and regular brake pad replacement.

The brake pads don’t wear out any faster with this model than you would expect, and it’s rare for the brake pads to wear in an uneven pattern.

There are a few miscellaneous benefits to the L-train as well. The frame doesn’t have a water bottle holder or front or rear racks, but the frame is drilled for all standard mount locations. That way, you can install whatever style of rack, bottle holder, or other accessories you might need.

The bike chain is also designed to save your work slacks, using a greaseless design that won’t leave oil stains on your pants. It also doesn’t need regular greasing like other chains, and won’t rust over time, reducing some of the regular maintenance on a typical commuter bike.

What Other Customer Says

As you can see, you don’t have to just take our word for it. Users of this bike everywhere are pleased with it’s simple and straightforward design and high-performance components. The design might have been inspired by a broken subway line, but there’s nothing broken about the way this bike works.

Overall, the L-train is a solid entry as a commuter bike. Its slimmed-down profile is easy to ride and maneuver, and its flexible frame design is made for easy customization. It’s not as lightweight as some competitors and doesn’t offer the smooth suspension of a more rugged commuter bike, but that doesn’t stop it from being a good option for urban streets and heavy traffic.